The PEN will be hosting a Meet & Greet at AGU 2017, New Orleans. The event is free to attend at the Hilton New Orleans Riverside, from 19:00 - 21:00 and will include refreshments. To add your name to the attendee list let us know by contacting the organiser

The EPSRC funded PEN, ReCoVER, and SECURE networks will be joining together from 11-12 January 2018 at Leeds University to host a joint conference. The conference will include reviews from the network PI's, talks from the feasibility study leaders, and a poster session with submissions from network members. For further details, registration and a timetable please visit the event page.

Following the success of the first writing retreat the Past Earth Network will be hosting a second retreat held at Callow Hall in Derbyshire. Members will work on grant applications or papers for the three days. Further details and registration are available here.

Following the success of last years PEN stall at the Yorkshire Fossil Festival, we will be attending again. Come and find Alex Dunhill at the fossil fest in Scarborough to see how fossils are being used to recreate the climates of the past.

31 July - 2 August the Past Earth Network will be hosting a retreat held at Callow Hall in Derbyshire to be arranged as an event for members to work on papers for publication, or on funding applications already at an advanced stage. Further details and registration are available here.

From 19 - 21 June the Past Earth Network will be hosting a workshop on Emulators from a Climate Modelling perspective at the University of Leeds. To register or for further information visit the event page here.

The PEN and ReCoVER are hosting a workshop "Pacing and synchronisation of palaeoclimate variability" on 29-30 June 2017 at Dartington Hall. For more information and to register your interest please visit the event page.

The PEN has a lot of up-coming activities for 2017/18. To see a list of all upcoming conferences, workshops, talks and events please check the "Activities" sections.

The Past Earth Network recently held a call for feasibility studies, the proposals we received were all very high quality, and the decision process was difficult. Six studies have now been awarded, for more details visit: /feasibility_call.html.

We would like to thank all those who submitted proposals to the PEN Feasibility study call. Each of the submissions received was of high quality, and the decision process will not be an easy one. The assessment panel will be working throughout this month to make a decision by early November, when the successful proposals will be announced. Again we would like to extend our thanks to all the PEN members who took part in the process.

The Past Earth Network teamed up with the environmental section of the royal society to hold a workshop on "Assessing Palaeoclimate uncertainty". The workshop was a three day event framed around five themes of Palaeocliamte modeling and the uncertainties regarding recorded data, models, and their outputs. For a summary of the event click

Please visit the link to sign-up for the 2016 PEN-ESS workshop from the 24-26 August, held by the Comparisons and Models working groups. The workshop web-page has all the information regarding the event. Attendance is £80.00 and space is limited, so sign up here: https://www.eventbrite.co.uk/e/workshop-assessing-paleoclimate-uncertainty-tickets-25480468768#tickets

The PEN would like to thank those that showed up to the PEN dinner at EGU. We hope that it was an enjoyable and informative event. If you joined us at EGU or even became a member through the meeting, please let us know on Twitter! @pastearth 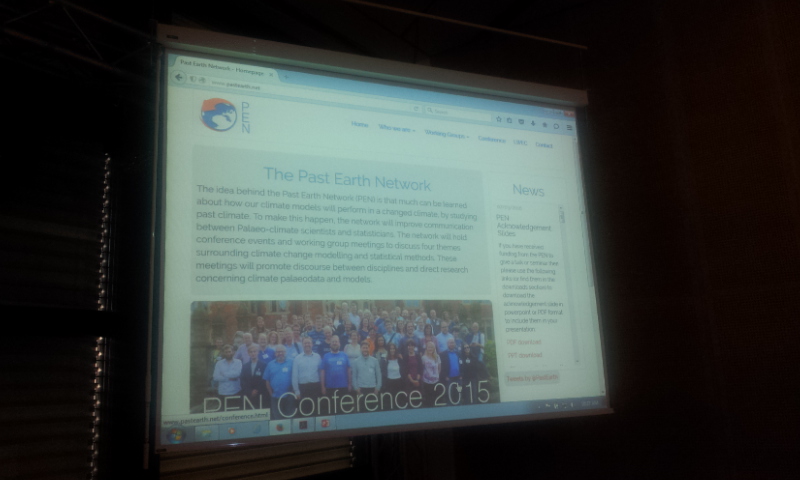 If you have received funding from the PEN to give a talk or seminar then please use the following links to download the acknowledgement slide in powerpoint or PDF format to include them in your presentation:

We would like to the thank those that attended the PEN dinner during AGU Fall conference in San Francisco on 17 December 2015. The meeting was a well received rest-bite from the bustle of AGU with over 20 attendees from multiple research backgrounds. PEN will host more meetings in 2016 so keep an eye on the mailing lists for invitations. To join the PEN click here and you will be subscribed to the mailing list too.

Alan Haywood of the PEN will be giving a talk "Understanding Earth's Climate Evolution using Data and Models" at the Manchester Geological Association on Saturady 5th December at 13:00 find more at this link

We are happy to announce that the following nominees have agreed to lead the working groups:

Congratulations go to Rhian Rees-Owen for winning the poster competition at the PEN Conference. The runners up were Paul Bachem, Thomas Hearing and Dominic Huelse. All the posters were excellent and scored highly which made the judges choice difficult, thank you goes to all who participated.

The conference has kicked off at Crewe Hall. Over 80 scientists from climate data, modelling, statistics and numerous other backgrounds have all arrived to take part in talks, poster sessions and working group meetings. We are also holding an early career session to discuss and guide scientists in their career.

Conference registration is now closed. All registered members should recieve emails instructing them how to proceed. There has been an extremeley positive response and the conference is shaping up to be a great event.

We have re-evaluated the budget and are happy to announce that the conference registration fee will remain at £100 therefore there is no longer a late registration period.

We are happy to announce the first PEN Conference will take place 1-4 September 2015 at Crewe Hall. Please visit the conference page for more information.

Please find the membership form to become a member of the PEN.

February 13th saw the first meeting of the Steering Committee and Stakeholder Advisory Board.

The Network is Live

As of January 26th the Past Earth Network became fully active, commencing activities with the first stakeholder and steering committee meetings early February.